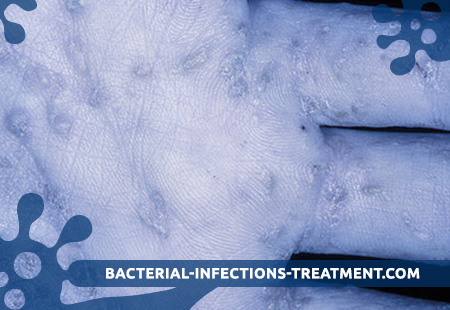 Scabies is a contagious parasitic skin disease caused by the scabies mite, which is visible to the eye as a whitish, about the size of a poppy seed, dot.

The first descriptions of scabies were made more than 2500 years ago. Scabies is described in the Old Testament and in the writings of Aristotle. In ancient Greece, scabies was attributed to a group of skin diseases united by the term psora. In ancient Rome, scabies was called scabies; this name has been preserved to this day. In medieval treatises, assumptions were made about the parasitic nature of scabies. Reliable evidence of the role of scabies mites in the development of the disease appears only after the creation of an optical microscope. In 1687, Italian physician Giovan Cosimo Bonomo and pharmacist Diacinto Cestoni first described the relationship between scabies mites and typical skin symptoms that develop after infection. It was they who first established that the disease can be caused by a microscopic organism. A complete and reliable description of the etiology and pathogenesis was given in 1844 by the German dermatologist Ferdinand Gebra. This manual was translated into Russian by A. G. Polotebnev in 1876.

There are theories about the wave-like nature of the incidence of scabies with a frequency of 7-30 years. However, these theories are heavily criticized. There is evidence of a cyclical increase in the aggressiveness of scabies mites due to the development of its resistance to a number of scabicides. Also, bursts of morbidity during periods of war, natural disasters, famine and other social phenomena leading to crowding of people are noted.

The incidence of scabies is characterized by seasonality. In Ukraine, this is autumn-winter. The same data was obtained from a 20-year observation in the Israeli army. The seasonality of the disease is partly due to the biological characteristics of the mites themselves, the fecundity of which reaches a maximum in September-December, as well as the fact that cool conditions contribute to better survival of itching in the environment. In addition, cold contributes to crowding and reducing perspiration (later, antimicrobial peptides are secreted, to which scabies are partly sensitive). In countries of West Africa, peak incidence is also noted in cold and dry seasons. In the same places where no pronounced climatic seasonality is observed, the incidence of scabies is evenly distributed throughout the year (Bangladesh, Gambia, Brazil).

Scabies can occur both epidemically and endematically. Sporadic outbreaks are characteristic of industrially developed countries, where the disease is localized mainly in organized groups united by common bedrooms (military barracks, boarding schools, orphanages, dormitories, prisons, medical institutions, etc.) or in asocial groups of society. Teams whose members are united only in the daytime (groups in kindergartens, classes in secondary and higher educational institutions, labor collectives), as a rule, do not represent an epidemiological danger. The overall incidence rate in such countries is low. According to England and Wales from 1994-2003. incidence of 351 cases per 100 thousand people per year in men and 437 in women was noted. In Russia, the annual incidence, judging by the sale of scabicidal drugs in the pharmacy network, exceeds one million cases.

However, in a number of countries, the incidence is much higher and can reach 40-80%. There are especially many patients among the peoples of Sub-Saharan Africa and the natives of Australia and New Zealand, which is probably due to the peculiarities of their immunity and the structure of the stratum corneum.

In general, at the end of the XX century. About 300 million people (5% of the world’s population) suffered from scabies.

In the world, scabies is more affected by young children, which is associated with their lack of immunity to the pathogen and with more frequent direct contacts with the skin of patients. In Ukraine, the situation is somewhat different. The main risk is the youth age group, which, forming only a tenth of the population, takes on up to 25% of the total incidence. The second place is traditionally occupied by school age, the third is pre-school, the fourth is mature. It is significant that with scabies, the distribution of the incidence among social groups is consistent with the age. The highest incidence is among students, lower among schoolchildren and preschoolers. This situation is explained by the characteristics of sexual activity and the development of antipruritic immunity in various age groups.

The itch mite (Sarcoptes scabiei) is not an insect, but a representative of arachnids. The length of the female scabies mite is about 0.5 mm. She lives about a month. Females make passages under the stratum corneum, laying 2-3 eggs daily, from which the larvae hatch. Larvae go through several stages of development and turn into adults. All this happens in the skin of the patient. There they leave the products of their livelihoods. Then they rise to the surface of the skin and mate. The males, having fertilized the female, soon die. The fertilized female invades the skin of the previous or new owner. Having left the owner, the scabies mite at room temperature is able to survive 2-3 days. When boiling or in the cold, they die almost immediately.

The fertilized female forms an itch passage in the stratum corneum of the skin, in which it lays 2-4 eggs per night. Mites dissolve keratin from the skin using special proteolytic enzymes contained in their saliva (they feed on the resulting lysate). Males form short lateral branches in the scabies course of the female. Life expectancy of a female does not exceed 4-6 weeks. Larvae hatch after 2-4 days and immediately begin to form passages in the uppermost layer of the skin. After another 3-4 days, the larvae molt and turn into protonymph, which in turn molt after 2-5 days into a teleonymph. Teleonimph develops into an adult male or female in 5-6 days. Total formation of an adult tick occurs in 10-14 days.

A tick can be infectious at any stage of development, but more often scabies is transmitted from person to person with fertilized adult females.

Ticks are not active in the daytime. The female begins to “dig” the course (2-3 mm per day) in the evening; then itching in patients with typical forms of scabies intensifies. At night, females come to the surface of the skin to mate and move to other parts of the body (on the surface of warm skin, ticks move at a speed of 2.5 cm per minute. Then the most favorable situation arises for infection.

The itch mite can live and breed only on human skin. It is estimated that without treatment in only three months, six generations of ticks in the amount of 150,000,000 individuals can be born.

A fertilized female drills the scabies in the upper layers of the epidermis – a gallery where she lays the eggs from which the larvae hatch, they come to the surface and, together with the males that live on the skin, cause itching and scratching with their bites.

Symptoms of scabies are caused by an immune-allergic reaction of the host to tick products, so all the symptoms develop only after sensitization of the patient. This explains the long asymptomatic period (up to 4 weeks) preceding the appearance of the first signs of the disease, with primary infection. In cases of re-infection, the reaction to the pathogen can develop within a day. The development of protective immunity also explains the difficulty of re-infection in the experiment, as well as the fact that with re-infection, a much smaller number of ticks is found on the patient’s body.

Itching with scabies is mainly due to an allergic reaction of type IV (delayed-type hypersensitivity) to saliva, eggs and tick excrement. Scratching caused by itching often leads to the attachment of bacterial flora (staphylococci and streptococci) with the development of pustules (pyoderma). Thus, the rash with scabies becomes polymorphic.

Interestingly, the same allergens are also found in household dust, populated by microscopic household ticks, which also feed on the human epithelium, which forms the basis of house dust.

With severe tick damage, the level of interleukin-4 increases. Th2-type immune response is also observed in patients, which is associated with an increase in their serum IgE and IgG in combination with eosinophilia. However, this pronounced humoral immune response does not have a significant protective effect. In scabies, the cellular immune response, which has been studied at the histological level, is more significant: ticks are surrounded by an inflammatory infiltrate consisting of eosionophils, lymphocytes, histiocytes and a small number of neutrophils.

With the Norwegian form of scabies, pronounced hyperkeratosis is observed, and in the areas of inflammatory infiltrate a large number of ticks are found (up to several million on the body of one patient). Norwegian scabies occurs in patients who do not feel severe itching, or who are unable to comb. Such conditions occur in immunodeficiencies, when the immune response to tick mites (AIDS, regular use of glucocorticosteroid and other immunosuppressive drugs), in violation of peripheral sensitivity (leprosy, syringomyelia, paralysis, spinal dryness), constitutional anomalies of keratinization, as well as in weak patients (senile dementia, dementia, limited mobility, etc.).

With the long-term existence of the infiltrate, the so-called nodular scabiosis lymphoplasia forms (nodular scabies), when the infiltrates become very dense and are distributed around the subcutaneous vessels and in the fatty tissue, resembling elements in lymphoma or pseudolymphoma.

In each case, when the patient complains of skin itching, scabies should be excluded first of all, especially if other family members or an organized team have itching.

Detection of scabies moves reliably confirms the diagnosis. To fully confirm the diagnosis, it is recommended to open the scabies with a scalpel coated with an oily substance, carefully scratching the stratum corneum with a blade along the scabies. The resulting scrapings are placed on a glass slide and microscopic. The best results are obtained when scraping “fresh”, not combed scabies moves on the interdigital spaces of the hands. Although this method has 100% specificity, its sensitivity is low.

Potassium hydrochloride allows you to dissolve keratin, contributing to better detection of ticks and eggs, however, tick feces, which also have diagnostic value, dissolve.

Scabies are easier to detect if you paint the skin with iodine tincture – the passages are visualized in the form of strips of brown color against a background of healthy skin painted in light brown. Abroad, ink is used for these purposes.

A video dermatoscope with a magnification of 600 times allows you to detect scabies in almost all cases.

Due to the fact that ticks cannot always be detected, a number of authors suggest the following practical approach for diagnosis: the diagnosis of scabies is established in the presence of a papulovesicular rash, pustular elements and skin itching (especially worse at night), as well as with a positive family history.

The volume of preventive measures is determined depending on the epidemiological situation. If scabies is found, an emergency notification form is filled in and the SES authorities at the patient’s place of residence are notified.

Persons from one focus are treated together to prevent re-infection. All persons in contact with the affected carry out a single prophylactic treatment of the skin with anti-mite drugs.

After the treatment of the patient, many guidelines recommend the processing of all things and linen that the patient has come in contact with (special sprays, washing in hot water). In accordance with the data on the survival of scabies mites in the external environment, as well as in connection with the extremely low probability of transmission of scabies through household items (indirect contact transmission path), these recommendations are discussed in each case. The latest manuals do not recommend processing mattresses, upholstered furniture and carpets; bedding and underwear should be washed in hot water if less than 48 hours have passed since its use.

Note: Contrary to a common misconception, scabies is not associated with poor hygiene. The scabies mite is not susceptible to water or soap. With a daily shower / bath, the number of ticks and the likelihood of infection are not reduced.