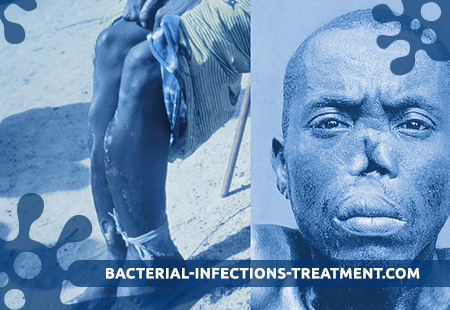 Begel is found mainly in arid rural areas of the Middle East and Equatorial Africa. In some localities, the prevalence of the population can reach 40-60%. The incidence is pronounced focal, most often familial in nature. Infection is promoted by a low sanitary and cultural standard of living of the population, narrowness of dwellings, the habit of eating and drinking from common dishes, ritual ablutions in mosques, etc. Most often, children aged 2 to 10 years are ill in low-income families.

The organisms that cause bejel belong to the same group of bacteria that cause syphilis, karate and yaws, and are called treponemas.

Reservoir and sources of the pathogen: an infected person.

The source of infectiousness period – weeks and months during the presence of specific lesions on the skin.

Begel is very similar to syphilis, but is not sexually transmitted. Most often, the transfer occurs through skin contact, or through the sharing of dishes.

Often called endemic syphilis, bejel is characterized by the occurrence of skin and bone damage, it begins in the mouth and gradually progresses. The last stage is the most serious.

The incubation period from 2 weeks to 3 months.

Early and late stages of bejel are observed as in yaw and pint. To the early stage include the incubation period, the primary and secondary rashes. Tertiary stage, similar to gummy manifestations of frambesia and syphilis, completes the course of the disease. Bejel’s incubation period varies widely and, according to most authors, ranges from 1-2 to 5-6 weeks. – 3 months

Primary affect, or bedgeloid chancre, is manifested at the site of pathogen introduction by minor inflammatory events in the form of rapidly disappearing papulovesicles or ephemeral vesicles on a slightly hyperemic swollen base. Lymphangitis and lymphadenitis are absent. As a result of a weak local tissue reaction and an anergic state of the regional lymph nodes, more active spirochemia occurs, and secondary efflorescences — Bedjelids — are formed in a shorter time than in frambesia and syphilis. They are disseminated, multiple, symmetrical and polymorphic: roseolous-papular, pustular and condylomatous. Initially, roseolous and pustular elements appear on the mucous membranes of the mouth, genitals and in large folds of skin. Their formation is provoked by trauma, irritation of the acute writing of the mucous membrane of the oral cavity, secretions and maceration of the epithelium in the anus and genitals. A characteristic feature of papular lesions, located in the folds and on the mucous membranes, is their tendency to maceration, weeping and hypertrophy, as is the case in patients with secondary syphilis. Therefore, such Bedzhelids are called condylomas. In the future, the Bedjelids spread to the trunk and extremities. Here they are more infiltrated, brown-red in color, often flaking abundantly, like psoriatic papules. In contrast to the syphilitic secondary eruptions, Bedjelids are accompanied by itching, firmly held for 6-8 months, and sometimes up to 1 year or more.
In the course of their existence, as a result of continuing spirochemia and insufficient immunogenesis, the appearance of additional groups of efflorescences is observed. Partial disappearance of evolutionary obsolete elements is the formation of pigment or depigmented, slightly scaly spots. Pustules, superficial and deep, occur as a manifestation of a poor course of the process. However, the formation of secondary pococcal eruptions is possible as a complication of bedjelide with a staphylococcal infection. In these cases, boils, ecthyma, hydradenitis, pyogenic ulcers are formed. In response to the addition of an additional infection, but just as with specific purulent begeliids, a feverish state, indisposition, and polyadenitis are observed. In some patients, painful periostitis and osteoperiosteitis occur, especially in the area of ​​the long tubular bones, with redness and swelling of the skin. In the process of evolution, the Bedjelids are partially spontaneously resolved with hyperpigmentation or depigmentation.

The diagnosis is established on the basis of the results of the epidemiological analysis in the outbreak, the age of the patients, the clinical manifestations, the detection of treponemas in microscopic specimens, and the positive results of serological studies. It is necessary to distinguish the late stage of bejel from yaws and venereal syphilis.

Laboratory diagnostics is based on serological reactions of RPR, TPHA, ELISA, Wasserman, Kahn, cytocholic, and RIBT.

Penicillin with prolonged action, erythromycin or tetracycline is used. The treatment is carried out with penicillin – extensillin, durant drugs, 1.2 million IU intramuscularly 1 time per day (2 injections in early forms with an interval of 1 week). In the late forms, these drugs are injected in 2.4 million IU 1 time per day in a week (2-3 injections). Azithromycin (Sumamed) – 1 g per day (in 2 doses of 0.5 g) and 4 days at 0.5 in one time, for a course of 3 g for early forms, and for late ones – 8 days for 0.5 g per one intake and per course – 5 g. You can prescribe tetracyclines, erythromycin, levomycepin, 1 g per day, for 14 days.

The prognosis for conducting specific therapy at an early stage is favorable, the disease is completely cured. In the late stage of severe destruction of bones, soft tissues, the development of gangoza after antibiotic therapy, restorative surgeries may be required.