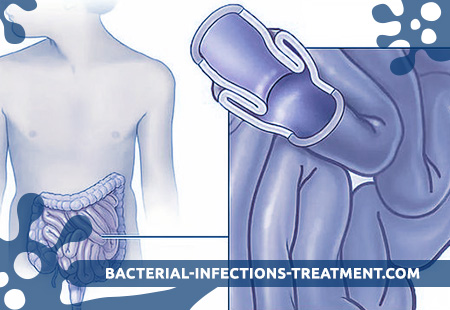 What is Intestinal Invagination?

In most cases, this diagnosis is given to children 3 months to 3 years old. About 65% of cases occur in patients under the age of 12 months. Intestinal intestinal invagination becomes the most common cause of intestinal obstruction in infants; in them, obstruction is usually idiopathic.

The exact causes of invagination in infants up to 12 months of age have not been elucidated. Invagination often appears after inflammation of the mucous membrane of the stomach and intestines, as well as after a cold in a child. An intestinal upset may occur after the introduction of complementary foods containing fruit and / or vegetable elements in the composition. This is because fiber enhances intestinal motility, which can lead to intussusception.

In older children, several factors can provoke the disease, for example, intestinal anomalies, including volumetric formation:

Among the risk factors, a disease such as cystic fibrosis in children is distinguished. In infants, there are structural features of the ileocecal section of the intestine, which are called predisposing factors for the development of intestinal invagination. They have a common mesentery, the cecum and ileum are mobile, there is a mismatch between the diameter of the ileum and its “ampoule”, the valvular apparatus of the bauginium valve is underdeveloped. These data were described by Teryovsky in 1955, Dyakin in 1972 and Feldman in 1977.

V. M. Dyakin in his works, which are based on 198 studies, notes that at the time of birth the formation of the ileocecal section of the intestine is not complete, it develops as the baby grows older.

The leading factor in the pathogenesis of intestinal invagination is the development of intestinal obstruction, as well as impaired local blood flow. As a result of this, ischemia, gangrenous processes, perforations develop.

Among the first symptoms of intestinal intussusception are abdominal pains, which come as if with contractions. They are repeated every 15-20 minutes. Often, with pain, vomiting occurs in infants. The child looks normal between attacks. With the development of intestinal ischemia, which occurs later, the stomach hurts constantly. The child becomes lethargic as the illness wears him down.

Hemorrhages occur in the mucous membrane, therefore, when examined, blood is found in the feces (rectal examination). Sometimes a child has a stool in the form of “raspberry” jelly. Palpation methods reveal such a manifestation of the disease as a sausage-like cord in the abdominal cavity. Perforation reveals the manifestation of peritonitis. Severe soreness and muscle tension of the anterior abdominal wall are recorded. The kid spares the affected area. The development of shock is indicated by such manifestations as tachycardia and shortness of breath.

If there is a suspicion of intestinal intussusception in children, an urgent diagnosis is made for an early appointment of treatment. Conservative treatment will be less effective if you delay diagnosis and initiation of therapy.

Radiopaque examination with barium is performed. The substance is injected through the rectum. This method is considered not only diagnostic, but also therapeutic. In previous years, the pressure of barium would often flatten the invaginate. But barium through the perforation in some cases enters the abdominal cavity (the perforation was not known to the doctors, since the symptoms did not appear), which caused severe peritonitis.

Therefore, if possible, today they give preference to such a diagnostic method as ultrasound. To carry out disinvagination (if the diagnosis is confirmed), air is injected into the rectum, this reduces the likelihood and consequences of perforation. Doctors monitor the child 12-24 hours after the procedure.

For a successful outcome, therapy should be started on the first day after the manifestation of signs of intussusception. In the hospital, the child is given enemas, and surgical methods of treatment are also relevant in some cases. Treatment methods can be different, depending on the situation, the patient’s age, etc.

Enema is effective in 75 out of 100 cases. There is evidence that enema with air is more effective than with barium or saline. ). The success of the procedure also depends on the duration of the symptoms: the longer the signs of intussusception are present, the less likely the enema is to be used successfully.

Bowel perforations occur in 25 out of 1000 fluid enemas. With air enemas, the ratio of the number of perforations to the number of attempts to deliver the enema is 2 to 1000. This procedure is used in some cases again. But it is not recommended to repeat more than 3 times. Do not use this method of treatment if there are signs of inflammatory processes in the abdominal wall, with sepsis (generalized infection), perforation, intestinal gangrene.

Stages of the operation for the treatment of intussusception:

If a large intestine is removed or a severe infection develops, an ileostomy should be performed for a certain period. This is an operation to connect the lumen of the small intestine through the abdominal wall with a colostomy bag. Without treatment, intestinal obstruction occurs, and a rupture of the intestinal wall is also likely, the consequence of which is the generalization of the infection, which in most cases entails a lethal outcome.

Intussusception can recur, which occurs in some cases. If treatment with enemas was carried out, relapse is possible in 10 cases out of 100. Further, the enema is re-applied or resorted to surgery. When using surgical treatment, a relapse is recorded in 2-5% of cases. Then the operation is repeated to straighten the intestine and find the causes of the disease. Sometimes the part of the intestine on which the pathology occurs is removed.

What to do after surgery
After surgery for about 2-3 weeks, you should be careful to notice the child’s possible complications:

The seam should be taken care of. Maintain hygiene in this area, check for signs of infection in the postoperative wound:

To avoid intestinal intussusception, you need to timely introduce quality complementary foods. Try to give the child an amount of food adequate for his age and physiological needs, do not overdo it. Be careful with the introduction of complementary foods from vegetables and fruits (this was discussed in more detail above).

If the child has manifestations of acute intestinal infections, urgently take him to the doctor and start treatment. It is important to treat worms on time in children and adults of any age, this is not such a harmless problem. Check your child regularly for lumps and adhesions.

After the operation, there is a risk of intestinal paresis of the child, therefore it is important to normalize the functioning of the intestines. After the operation is completed, the mesentery root is infiltrated with a solution of novocaine, as well as intestinal decompression through the appendicostomy, and epidural anesthesia is applied.

To detect an increase in temperature in the postoperative period, the child’s temperature is measured every 3 to 4 hours.